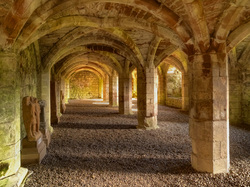 We're off and running.  Below is a list of past, present and future shows.  Take a look.  If you have any suggestions for shows you like to see us do in the future send us an email at theundercroftplayers@outlook.com  or send us a message on our Facebook page. We are always happy to hear your feedback.

(Pictures from the all shows can be found on the Picture tab - a drop-down off the Season tab) ​
Our first season opened with The Art of Self-Defense in October 2013 - see our Pictures page.
Followed by A Christmas Carol: A Radio Play in December 2013- see our Pictures page.
Followed by our Youth Summer Stock program of The Elves and the Shoemaker July 2014.

Our Second season started with The Hunchback of Notre Dame in November 2014 - see our Pictures page.
Weekend Comedy, was in April 2015.
And our Youth Summer Stock production of The World of the Brothers Grimm was in July 2015

Our Third season opened with A Christmas Carol: A Radio Play, November 13-22, 2015
Followed by Fools in April 2016
Followed by our Youth Summer Stock production of The Trial of Goldilocks in July 2016

Our Fourth season opened with our tenth show, The Velocity of Autumn, in September 2016
Followed by 'til Beth Do Us Part, in February 2017
Finished with our Youth Summer Stock production of The Mad Tea Party in July 2017

Our Fifth Season -Second Chances - opened with It's a Wonderful Life, A Radio Show in November 2017
Followed by our all Youth production of The Selfish Giant in April 2018
Finishing with Little Old Ladies in Tennis Shoes in August 2018