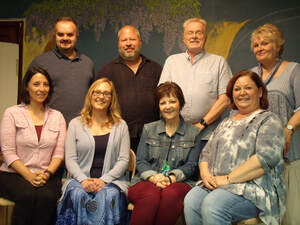 Know-it-all Pauline tries to match up her divorced friend Carla with Jason, a friend of her husband, and happily discovers they both love old movies from the 1930s. But Jason and Carla, burned by previous relationships, resist Pauline's efforts to kindle a romance. Resentful at being thrown together, they put on a big show of actively disliking each other. Their dramatic argument succeeds in chastening Pauline while confirming the objections of her husband, Henry, who had been against the whole idea. Secretly, however, Jason and Carla begin dating. Then Carla's ex-husband, Daniel, a bit of a stuffed shirt, returns from an around-the-world journey of self-discovery and complicates everything by wanting to reconcile. At first, Carla staunchly resists him, but she finds herself drawn back by old feelings and ends up defending Daniel from Jason's verbal barbs. As Carla wavers in her affections, Jason retaliates by taking up with Cindy, a ditzy young actress who appeared in one of the silly commercials he wrote. Jealousy and mutual accusations drive Jason and Carla further apart as the two movie lovers struggle to find a way to their own happy ending.

Parents voted and The Undercroft Players won the Most Loved Acting Studio for 2019! - Hulafrog the go-to website for kid-friendly activities and events around town